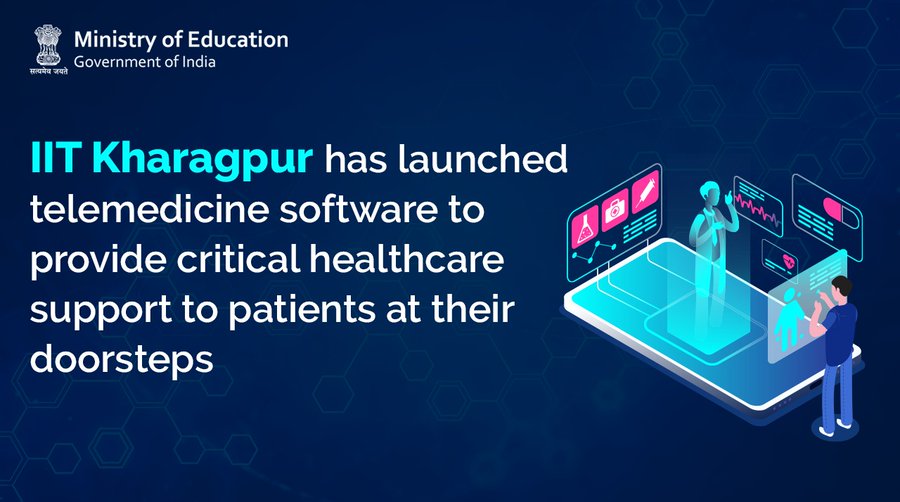 Indian Institute of Technology (IIT) Kharagpur researchers has launched telemedicine software ‘iMediX’ which will provide critical healthcare support to patients at their doorstep. The patients will receive a consultation by physicians without having to go to the hospitals and clinics.

Standard internet browser –
The system iMediX which is accessible by any standard internet browser has been developed by the researchers at IIT Kharagpur Department of Computer Science and Engineering, said an Institute Spokesperson. This software provides with the facility to the patient to sign up and get an account by filling details like Email ID and their Contact Number. The patient can make a request for consultation by choosing a department of the hospital, entering their chief complaints and uploading necessary scanned medical records. The hospital administration processes the request and assigns a doctor. The doctor after logging in sets an appointment date and time for the patient and the system communicates the information to the patient by mail and SMS.

.@IITKgp researchers have launched a telemedicine system ‘iMediX’ to help patients receive a consultation by physicians without having to go to hospitals or clinics.

Software has been launched –
The doctor consults the patients on the day of the visit through video conferencing and gave him prescription through mail. This software has been launched on October 2, 2020 on the occasion of Gandhi Jayanti.This will be integrated at Dr. BC Roy Technology Hospital of the institute which provides emergency healthcare services for the campus residents and employees, confirmed the office of Principal Medical Officer Dr. Samir Dasgupta.

Education Minister Tweeted –
Education Minister also congratulated the team for such a great innovation. In this Corona Pandemic, when everything is preferred to be done at home, this innovation is going to prove very beneficial for the patients. “.@IITKgp researchers have launched a telemedicine system ‘iMediX’ to help patients receive a consultation by physicians without having to go to hospitals or clinics. I congratulate Prof V K Tewari, Director-@IITKgp & his team on this #innovation”, tweeted Ramesh Pokhriyal ‘Nishank’, Education Minister of India. 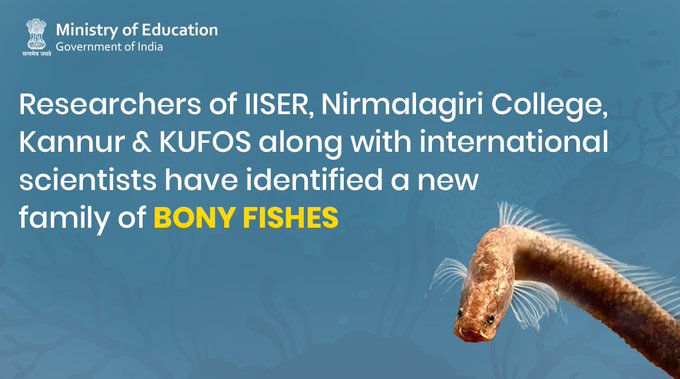 Researchers of IISER Pune (Indian Institute of Science Education and Research), Nirmalagiri College, Kannur and Kerala University of Fisheries and Ocean Studies (KUFOS) in Cochin along with international scientists have identified a new family of Bony Fishes from the Western Ghats, and named it Aenigmachannidae.

Discovery of the enigmatic Gollum Snakehead –
A year after the discovery of the enigmatic Gollum Snakehead, Aenigmachannidae gollum from the rice fields of Northern Kerala, scientists have now carried out detailed studies on its skeleton and genetic assembly, that revealed that this species, and it’s congener Aenigmachannidae mahabali, represents an new family from Channidae, in which both species were initially placed.

What a discovery! 👏@IISERPune, Nirmalagiri College & the Kerala University of Fisheries and Ocean Studies in Cochin along with international scientists have identified a new family of bony fishes from the Western Ghats, to be called Aenigmachannidae.https://t.co/ORlg1y6AIx pic.twitter.com/NZ1yhkc7xu