New Delhi :
Indian Institute of Technology, Mandi (IIT Mandi) has developed a low cost cooking stove which is named as ‘Atuvik’ to combat indoor air pollution and decrease dependency on firewood. The stove has been designed by 2 Asst. Profs. Dr Satvasheel Ramesh Powar & Dr Atul Dhar, along with research scholars.
Atuvik produces a range of cooking and heating solutions from the simple single-burner cooking stove to the integrated cooking and heating solution for higher elevation areas.

Dr Satvasheel Ramesh Powar, Assistant Professor, School of Engineering, IIT Mandi said, ”Similar cook stoves during research phase were showcased in a local exhibition.We got an overwhelming response from the rural people including numerous queries. This was a tempting event and had revealed the need of the product. Instead of just an idea-driven this project became a need-driven.”

– The innovation targets a clean and almost complete combustion of firewood by the innovative design of the combustion chamber.
– The natural draft produced in the chimney contributes to air-suction, which increases the availability of oxygen for combustion.
– There is also a defined flow path for feedstock, air, and combustion products.

Grant of Rs. 7.5 lakh under the Nidhi Prayas programme –

New Delhi :
Indian Institute of Technology, Kanpur (IIT Kanpur) now has a New Thermal Energy Storage System in Campus. This can said as a huge step towards sustainable future. IIT Kanpur’s new thermal energy storage system, installed in the Centre for Environmental Science and Engineering (CESE) building, has a capacity of 775 turn/hour.

Prof Sameer Khandekar from the mechanical engineering department who has provided periodic guidance for the selection of the technology said that the institute is leading a joint Indo-US project, which is called UI-ASSIST, on smart grid and storage technology, funded by the Department of Science and Technology (DST), through Indo-US Science and Technology Forum, New Delhi.This system has been installed at the Centre for Environmental Science and Engineering building. 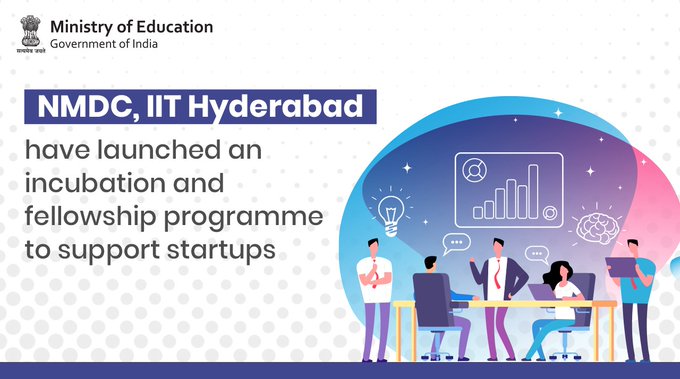 New Delhi :
NMDC and Indian Institute of Technology, Hyderabad (IIT Hyderabad) have come together to launch an incubation and fellowship programme to support deep tech startups. This initiative is titled, NICE Program (NMDC Innovation and Incubation Centre). The objective of NICE is to promote entrepreneurship and innovation in the country and to support the Startup India movement.

NICE initiative is a 5-year joint program that would support 15 fellows and 15 startups by providing them financial aid, mentoring support, co-working space, other infrastructural benefits, and more.With the total program budget of Rs 10 crore funded by NMDC, NICE aims to support 5 startups every year with financial aid of up to Rs 25 lakh to convert their proof of concept into a scalable business.